Putting lighter fuel on the bonfire! 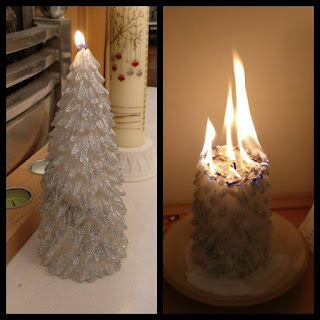 A few weeks ago my daughter went out and bought a Christmas candle. That night she decided to light it. Everything was fine until, after an hour, the whole thing suddenly burst into flame.

Fortunately my daughter was in the room, the candle was extinguished and no harm was done. But then she took a fateful decision. She decided to put a post on Facebook warning her friends about the candle and asking them to pass on the news about its dangers.

Within a few hours the post had gone viral and within a couple of days it had been shared more than 300,000 times. Journalists began ringing the house. The story appeared on lots of local 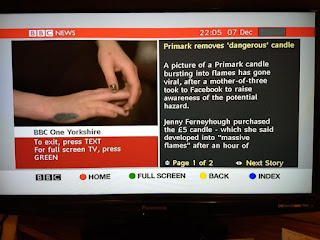 newspaper websites around the country, on the BBC website, and on The Sun and The Daily Mail websites. My brother-in-law even rang to tell us it was on Teletext. I didn't know that Teletext still existed! TV crews asked to visit the house, but my daughter politely declined.

This turned out to be a good idea, because  already people were trolling her to say she was a cheapskate for only spending £5 on a candle. Also, the journalist who wrote up the story for The Sun decided to embellish it with a bit of false news. He claimed the candle had been alight in the children's bedroom while they were asleep.

That was when the serious trolling started. People posted that my daughter was an irresponsible parent. And then someone got into the record of her Facebook posts and found one in which she had posted a picture of the 5 November municipal bonfire and joked that it was her barbecue and she had thrown lighter fuel on it. Her brother then jested that it looked as though the garden furniture had gone up as well, and she replied that actually the whole house had burned down. The trolls didn't open the picture properly, so didn't  get the joke, and quickly concluded that  she must have thrown lighter fuel on the candle too. Someone said it was time to launch a counter campaign in defence of the candle.


John's Gospel warns about this kind of thing. First it tells us that, like my daughter’s story about the dangerous candle, the light of God came into the world to reveal the truth. But then it goes on to warn us that the darkness hit back. It didn't want any light shining on the truth and it tried - like the trolls - to overcome it.

Eventually, the Gospel says, the light burst out suddenly into an inextinguishable blaze. It was no longer just a little candle flame guttering in the darkness. Instead it became a glorious light, full of truth and grace. We have seen its glory, says the writer. The darkness could not win.

The light which John talks about is Jesus. The attempt to stop him is the campaign against him which ended in his death on the Cross. But his death backfired on the people who wanted to put the darkness back in control. The Easter story went viral and now all of us have to decide which version of the story we want to believe, the version put out by the forces of darkness or the version begun here by John.

Popular posts from this blog

I don't believe in an interventionist God

May 29, 2014
Matthew 28.1-10, 1 Corinthians 15.1-11 I like Nick Cave’s song because of its audacious first line: ‘I don’t believe in an interventionist God’. What an unlikely way to begin a love song! He once explained that he wrote the song while sitting at the back of an Anglican church where he had gone with his wife Susie, who presumably does believe in an interventionist God - at least that’s what the song says. Actually Cave has always been very interested in religion. Sometimes he calls himself a Christian, sometimes he doesn’t, depending on how the mood takes him. He once said, ‘I believe in God in spite of religion, not because of it.’ But his lyrics often include religious themes and he has also said that any true love song is a song for God. So maybe it’s no coincidence that he began this song in such an unlikely way, although he says the inspiration came to him during the sermon. The vicar was droning on about something when the first line of the song just popped into his head. I suspect …
13 comments
Read more

Giotto’s Nativity and Adoration of the Shepherds

January 02, 2011
John 1.10-18
In the week before Christmas the BBC broadcast a modern version of The Nativity which attempted to retell the story with as much psychological realism as possible. So, for instance, viewers saw how Mary, and Joseph especially, struggled with their feelings.

But telling the story of Jesus with psychological realism is not a new idea. It has a long tradition going back seven hundred years to the time of the Italian artist Giotto di Bondone. This nativity scene was painted in a church in Padua in about 1305. Much imitated it is one of the first attempts at psychological realism in Christian art. And what a wonderful first attempt it is - a work of genius, in fact!

Whereas previously Mary and the Baby Jesus had been depicted facing outwards, or looking at their visitors, with beatific expressions fixed on their faces, Giotto dares to show them staring intently into one another’s eyes, bonding like any mother and newborn baby. Joseph, in contrast, is not looking on with quiet app…
1 comment
Read more

Why are good people tempted to do wrong?

February 25, 2014
Deuteronomy 30.15-20, Psalm 119.1-8, 1 Corinthians 3.1-4, Matthew 5.21-37 Why are good people tempted to do wrong? Sometimes we just fall from the straight and narrow and do mean, selfish or spiteful things. But sometimes we convince ourselves that we’re still good people even though we’re doing something wrong. We tell ourselves that there are some people whose motives are totally wicked or self-regarding: criminals, liars, cheats, two-timers, fraudsters, and so on, but we are not that kind of person. We’re basically good people who just indulge in an occasional misdemeanour. So, for example, there’s Noble Cause Corruption, a phrase first coined apparently in 1992 to explain why police officers, judges, politicians, managers, teachers, social workers and so on sometimes get sucked into justifying actions which are really totally wrong, but on the grounds that they are doing them for a very good reason. A famous instance of noble cause corruption is the statement, by the late Lord Denni…
2 comments
Read more

METHODISTBISHOP
I am a Methodist Minister living in Wakefield in Yorkshire. I work part-time as a consultant to a community forum in Darnall, a multicultural part of Sheffield. I will shortly be moving to a new role as manager for Asbestos Support Central England, a charity supporting people with Asbestos Related Diseases. I previously worked in Wakefield as a circuit minister and circuit development officer for the Aire & Calder Methodist Circuit, and in Beeston, in South Leeds, where I helped to run a charity called Faith Together in Leeds 11, as well as chairing several other local organisations including the Leeds branch of the CVS. I used to be a director of Involve Yorkshire & Humber, for a long while the voice of the voluntary and community sector in the region, and I was a member of the Council of the Yorkshire & Humber Faiths' Forum. All the views expressed in this blog are entirely personal and do not represent any of these organisations.